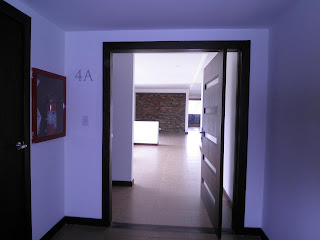 We have moved to our new apartment. We had more stuff then I thought a person could accumulate after only 7 months, I think it just multiplies.


On our second day here while sitting out on the balcony I looked up and noticed a rainbow in the sky. Normally the rainbows that I've seen the ends seem to touch the ground but not this one it was circling the sun. It was very beautiful and it made me happy about all the things I do have in my life.
Steve had to take a new way to Moca, which seems to be working out well.
Nick had to learn how to take the bus on his own. He and I set out to learn which busses to take. We found that he would need to take 2 busses to get there and we would have him take a taxi home from there. Save a little bit of money. So the next day he went out on his own to catch the bus. I thought he had caught the bus then all of the sudden I heard someone at the door. I thought it was Steve returning home, but it wasn't. It was Nick he was so upset. He had waited for the bus and saw several with the same number that he needed but none with the appropriate title on the top. He finally got on one after four busses went by and then the bus driver was able to communicate that he was going the opposite direction then the way Nick need to go. He was very upset. So he calmed down and we both headed down to find the bus on another street that won't have the same bus going to two different places. Now it was my turn to get upset.
We were looking for the bus stop and kept walking until we could find when all of the sudden there was our bus. I flagged him down in normal Cuencano fashion (we ride the bus often so we know how it's done), but he wouldn't open his door. He had stopped because of the traffic but he wouldn't let us on. Ugh! I understand we weren't at a marked stop but that was never a problem before but this driver was not interested in letting us on. So, we walked and found the next stop and we waited and we waited and finally the bus came. Nick and I rode together to the next stop and there he and I went our seperate ways. Steve was waiting for me across the street at the stop going towards home so we could ride together and Nick was waiting for the next bus to get him to spanish. At that moment rain started to downpour. I felt so bad that Nick was waiting on a street corner and Steve and I were waiting at a covered stop. Oh, did I feel like a bad mom, but I must remember he is fourteen and he can do it. He had his rain protectant jacket on...

In the next few months we will try to design/find furniture that we want built and get what we want. We are currently borrowing our friend Trish's excess stuff that she brought over in her container.
Posted by Susan at 5:28 PM

Email ThisBlogThis!Share to TwitterShare to FacebookShare to Pinterest
Labels: apartments in Cuenca, busses in Cuenca, expat children, furniture in Cuenca